This website may not display properly using your current browser version. Please consider updating to a supported browser to get the most out of the Metricon website.

View this website for more information about supported browsers

Home in the Glamptons: Where Hamptons style meets country glamour

It’s country living without compromise. Suitable for expansive properties and corner blocks alike, our designers wanted the Davenport 30 to either enhance homeowners’ country lifestyle, or help them bring it to the suburbs.

With no boring sidewalls allowed, you will appreciate the beauty of this single-storey home from every angle. Meanwhile, inside, seamless integration between expansive, light-filled living areas and the breathtaking scenery outside melts the internal aspects away altogether.

With a focus on striking design features, this 30sqm design in the Freedom by Metricon range is spacious and spectacularly stylish, featuring a raked ceiling, highlight windows, mirrored fireplace and waterfall island bench.

Beauty from all angles

It’s a house that doesn’t clash against its outdoor surroundings. Instead, it invites them in for tea.

“For people who have acreage or larger parcels of land, we wanted the design to make the scenery the focal point from every aspect. We wanted to build something with serious style and impact, while also harmoniously blending in with the rolling hills and vine-blanketed valleys of its natural surroundings.”

“We also wanted to highlight how beautifully ranch-inspired designs can work if you have the right corner block in new subdivisions.”

Like its exterior, the Davenport 30’s interior palette embraces muted tones so that the lush greenery of the outdoors remains the focal point.

“If you think about country living, it’s all about nature and the interior needed to tie in with that,” Ricky says. “We’ve used a lot of creamy greys and greiges, but then went slightly darker in the hard finishes, and introduced panelled doors to the kitchen.”

Wider than it is long, the Davenport is perfect for modern country living and will look magnificent stretched across a hilltop taking in the vistas, with eight striking facade options designed to enhance the home’s grand entrance.

“The beauty of this façade is the width and depth of the portico,” Ricky says of the home, displayed with the Hamptons-inspired Whitehaven option.

“It has a double gable, and the portico extends forward from the front door, which creates a nice sense of entry. Given it is such a long home, we wanted to really identify the entry and design something that has impact and presence on the street.”

The design is well-considered from every aspect, with the corner block putting the home’s subtle side-profile details on display.

And, of course, no ranch-inspired home would be complete without a Colorbond top hat, and the Davenport dazzles under a muted, aluminium roof. The light and bright exterior, coupled with its crisp silver lining, helps to complement the style’s natural, understated aesthetic, without becoming bucolic or quaint.

But the Davenport’s beauty isn’t just facade deep, with the home’s stunning style continuing behind its timber-framed, glass feature door.

“The photos don’t do it justice,” Ricky says. “As you step into the large entrance foyer, a key feature and focal point is the picture window directly opposite, which offers views to the outdoors and rolling hills beyond. We also raised the ceiling in that area to create an added sense of drama and used a painted timber lining board to tie in the theme.”

Made for living, not just looking

“This is probably one of the first designs where you walk into the living space, and you see the kitchen front on,” Ricky says of the floorplan’s unique layout. “You normally see the kitchen beside you or on an angle, so this really puts it centre stage. The seamless integration of the outdoors is another lovely touch.”

Another exciting feature of the design is its laundry, located off the kitchen so that it can serve as a mudroom, too.

That the Davenport’s interior ambience is as at the same time laid-back and luxurious, understated and stylish is no accident.

“This home was a year in the making and is the first of its kind in Victoria,” Ricky says. “This is the next evolution of the ranch living, so I put a lot of pressure on myself to get it absolutely perfect. We hope people will fall in love with it.”

You do a 3D virtual tour of the Davenport 30 here or visit the display at Warragul’s Brandy Creek Views Estate.

If you enjoyed this article, sign up to our newsletter and stay up to date with all the latest building news, trends and upcoming events. Or, for more interior design or style inspiration, visit one of our award-winning display homes, check out our style gallery, where you can save and organise all your favourite Metricon home designs or head to our new video gallery. 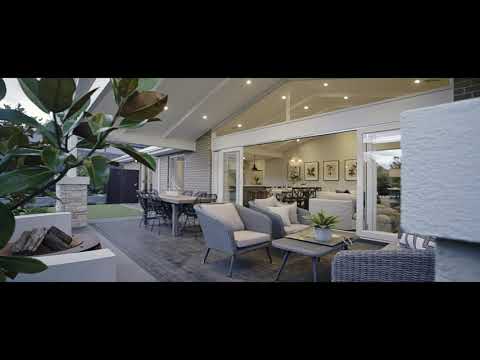 Get the latest news from Metricon, delivered straight to your inbox
Subscribe to Metricon news

Photographs on this web page may depict fixtures, finishes and features not supplied by Metricon such as landscaping and swimming pools. Accordingly, any prices on this web page do not include the supply of any of those items. For detailed home pricing, please talk to a New Home Advisor. NSW Contractor's Licence: 174699C (Metro/Southern), NSW Contractor’s Licence: 36654C (Northern), SA Builder's Licence: BLD231776, QLD - QBCC licence: 40992, VIC Builder's Licence: CDB-U 52967.

This information helps us show you the home designs, display centres, and packages that are most relevant to you.